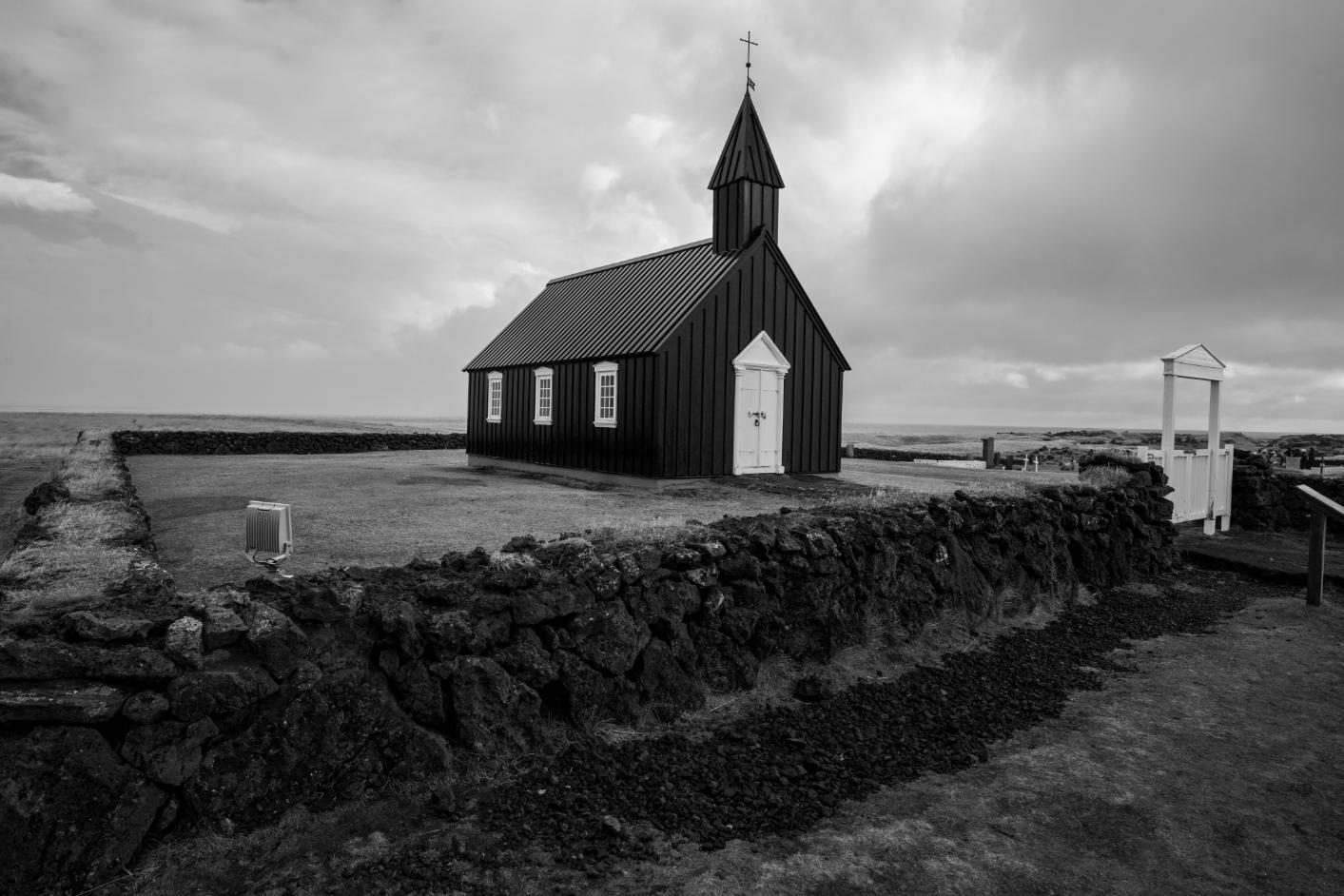 Iceland in October is more the “Land of Biting Winds” than the “Land of Fire and Ice”, as it’s currently advertised. The waterfalls that I once saw frozen in October were as iceless as they were in summer but the wind was so piercing and strong that it rolled my heavy Kata camera bag with three lenses inside across the yellow grass and the asphalt pathway close to the cliffs of Arnarstapi, not far from the Black Church.

When I heard about the presence of a black church on the southern side of the Snaefellsness peninsula I couldn’t help thinking of the Black Church of my homeland, in Brasov, Romania. Erected between the 14th and the 16th centuries it is a dazzling example of German Gothic architecture, its “black” denomination due rather to 19th century pollution than to a 17th century fire, as believed until a few years ago. Much more modest, the wooden Black Church of Búðir (Búðakirkja) was originally erected in 1703 by Bent Larusson, a local merchant, rebuilt by a woman, Steinunn Sveinsdottir, in 1848 without any help from the Lutheran Church after it had rotted down, moved in 1948 from the old graveyard and re-consecrated in 1987. Its matted black colour is a result of the tar used in painting it, providing a strong contrast to the snow-covered mountains of Snæfellsbær.

I arrived there on a day in which the wind speed, as read from the road panels, was 28 mps, i.e., 100 kmph, which should’ve triggered an orange weather alert, as on my first day in Reykjavik, and frozen raindrops were biting into my face from all directions. Walking along the coast in Iceland I made the unfortunate experience that wind over there behaves according to Murphy’s laws, i.e., always against the camera lens, whichever way I turned myself. I circled the church trying to get a side view with the snowy mountains behind it from the outside of the graveyard but the wind moved in step with me so I had only one shot before I needed to wipe the lens clean with the deer skin bought in the Chinese Dandong market near the China-North Korea bridge. Behind me, outside the graveyard, in a car, an old couple was following all my moves and I wondered whether they were tourists like me but smarter, waiting for the rain or at least the wind to abate. For a few minutes the sky cleared a bit and at the same time I saw a man lifting the latch of the white front gate, struggling with the door and then finally entering the church. I thought it was a great opportunity to see the inside and chat with a local and rushed to enter the church myself. “Taler du dansk?” (Do you speak Danish?), were my first words. Danish is learned as the second language in Icelandic schools and fluency in Danish is often a sign of higher education.

I was happy to hear that his reply was positive, in halting but passable Danish, and asked if there was any church service the next day which was a Sunday. “No, but there will be a concert tonight”, came the answer. “A concert? Religious music? Something from the book of psalms?” I asked with a smile and big hopes. “No, a local musician is going to play Leonard Cohen. My wife can tell you the details. She will be here soon.” That sounded even better. An Icelander playing Leonard Cohen in the Black Church to an audience of maximum 15 spectators sounded like an extremely fortuitous happening not to be missed. The around 40 km I would have to drive back to my hotel in Grundarfjörður, then back to the church in the evening and then back again after the show I didn’t see as a major impediment in spite of the changing weather making driving close to the mountains, and especially after dark, extremely dangerous.

Meanwhile, from one of the narrow church windows I could see a small gathering of people on the graveyard lawn so I excused myself and headed there. The old couple from the car were now the main protagonists, the man carrying in his hands an urn, accompanied by a blonde woman near a small, shallow, square grave. I kept the distance and didn’t even enter the walled enclosure but my Kyrgyz felt cap covered by a Cappadocian headdress with pointed top, flaps embracing the ears and tied around my neck at the back, making me look like a blue-eyed pasha, couldn’t fail to attract attention so after looking at each other for some long moments over the graveyard wall I dared ask the younger lady if she spoke Danish. It’s a trick I’ve always used in Iceland, knowing that speaking a language they all learn in school would create a bit of a connection between us. Danish was the official language until 1944, when taking advantage of the war and the German occupation of Denmark, Iceland split from Denmark, and many Icelandic words can be understood by Danish speakers either because of their common roots or because of Icelandic loanwords from Danish. She did speak it and even relatively fluently, and was, as expected, the wife of the man in the church. From her I got the details, that there would be two concerts, one at 7pm and the other at 9pm, that the first one was sold out and that the price would be 2500 ISK (17.5 EUR). Slowly more locals arrived for the burial and I was asked not to take pictures of the congregation, so I left and promised to return.

And then, just as I was going to enter the car I had a second flash of luck. I couldn’t believe my eyes: In front of the white gate of the Black Church there was an Asian-looking guy with a long down coat of the kind that is very popular in South Korea and China, on whose back it was written white on black “DEVILS” in capital letters. I must confess that in spite of the obvious Romanian-German reference to the Brasov/Kronstadt Black Church, my first association with the Icelandic name “Black Church” was of Satanic black masses, maybe because an involuntary, not entirely unwarranted musical association of Nordic countries with satanism (I.e., if we except the Nordic jazz musicians of ECM!), see the appropriation of the Icelandic Dimmuborgir lava field name by the Norwegian black metal band Dimmu Borgir. I silently positioned myself behind him and changed the angle several times in order to have a better composition of him juxtaposed with the black church, after which I asked him if he spoke English. It turned out that he and his friend were from Xi’an, a town I had visited a couple of times. I was asked if I could photograph his funny-looking but fashionable friend as well, which I was happy to oblige. 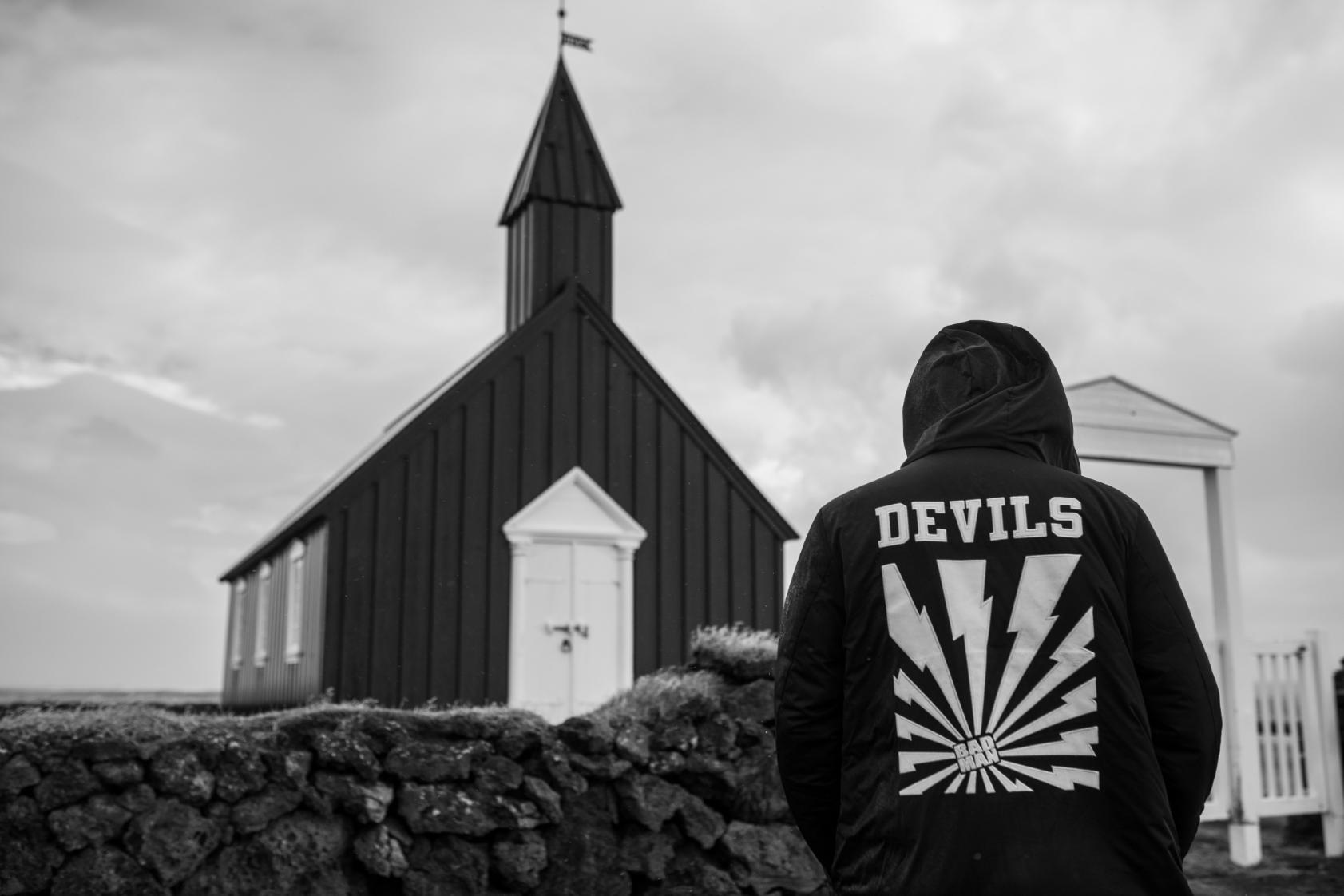 Returning to the guesthouse in Grundarfjörður I barely had time to grab a bite before I had to drive back to be at the church at 8:30. I made it on time in spite of the dark, icy and partly snow-covered roads, and found the Danish-speaking lady alone. I was told that the church was one of seven churches served by rotation by a single priest and she appeared genuinely impressed that I drove 40 km just to attend the concert. Honestly speaking, Leonard Cohen wasn’t one of my musical idols. I’ve always preferred Bob Dylan for his musical versatility (most of Leonard Cohen’s songs are in the same minor 6th chord but Dylan himself said of Cohen: “When people talk about Leonard, they fail to mention his melodies, which to me, along with his lyrics, are his greatest genius. Even the counterpoint lines—they give a celestial character and melodic lift to every one of his songs. As far as I know, no one else comes close to this in modern music. Even the simplest song, like ‘The Law,’ which is structured on two fundamental chords, has counterpoint lines that are essential, and anybody who even thinks about doing this song and loves the lyrics would have to build around the counterpoint lines.”) and thematic range (Cohen’s topics, mostly love, death, religion, depression, cannot compare to Dylan’s additional social/political themes) but I don’t know if he’s the better poet (although the Nobel committee seems to have settled this matter), only that Leonard Cohen’s “Beautiful losers” prose is more readable than Bob Dylan’s “Tarantula”.

Slowly, the small and cold church room started to fill with people and suddenly, among the 12 spectators I heard German. Before I could ask them what they were doing in this wind-swept but theoretically God-filled, not -forsaken place, the blonde organiser told me her brother was married to a German and her family had moved in the neighbourhood to be with their daughter. “How can you stand this autumn wind? It’s not even winter yet!”, I couldn’t abstain from asking them, out of politeness not mentioning the desolate and minimally inhabited land around. “But it’s beautiful sometimes”, came the laconic and polite answer. A few minutes before 9 the protagonist appeared, a tall, blond Icelander dressed in black. I negotiated the payment in euros, got the rest in Icelandic kronur and asked if I could photograph him during the show. “No problem.”

Daniel Hjalmtysson, the name revealed during the show, took off his thick coat, pulled up his fleece jacket sleeves, showing his richly tattooed arms, placed himself of the chair in front of the radiator and started with “Bird on a wire”. Daniel’s voice sounded eerily like Leonard Cohen’s gravelly, deep bass voice, making me forget for a minute that I was there also to photograph, not only for a passive experience. My mistake - one has to take any opportunity and shoot as soon as the moment presents itself - the chandelier got turned off and the tiny room was bathed in darkness, the only dim light coming from the Christmas bulb garland hanging over one of the wooden crossbeams and the reflector beaming through the side windows, too little to allow enough contrast for a decent photo. Suzanne, So long, Marianne, Famous blue raincoat, Chelsea Hotel #2, Dance me to the end of love, all followed, interrupted by introductions in both Icelandic and American English. 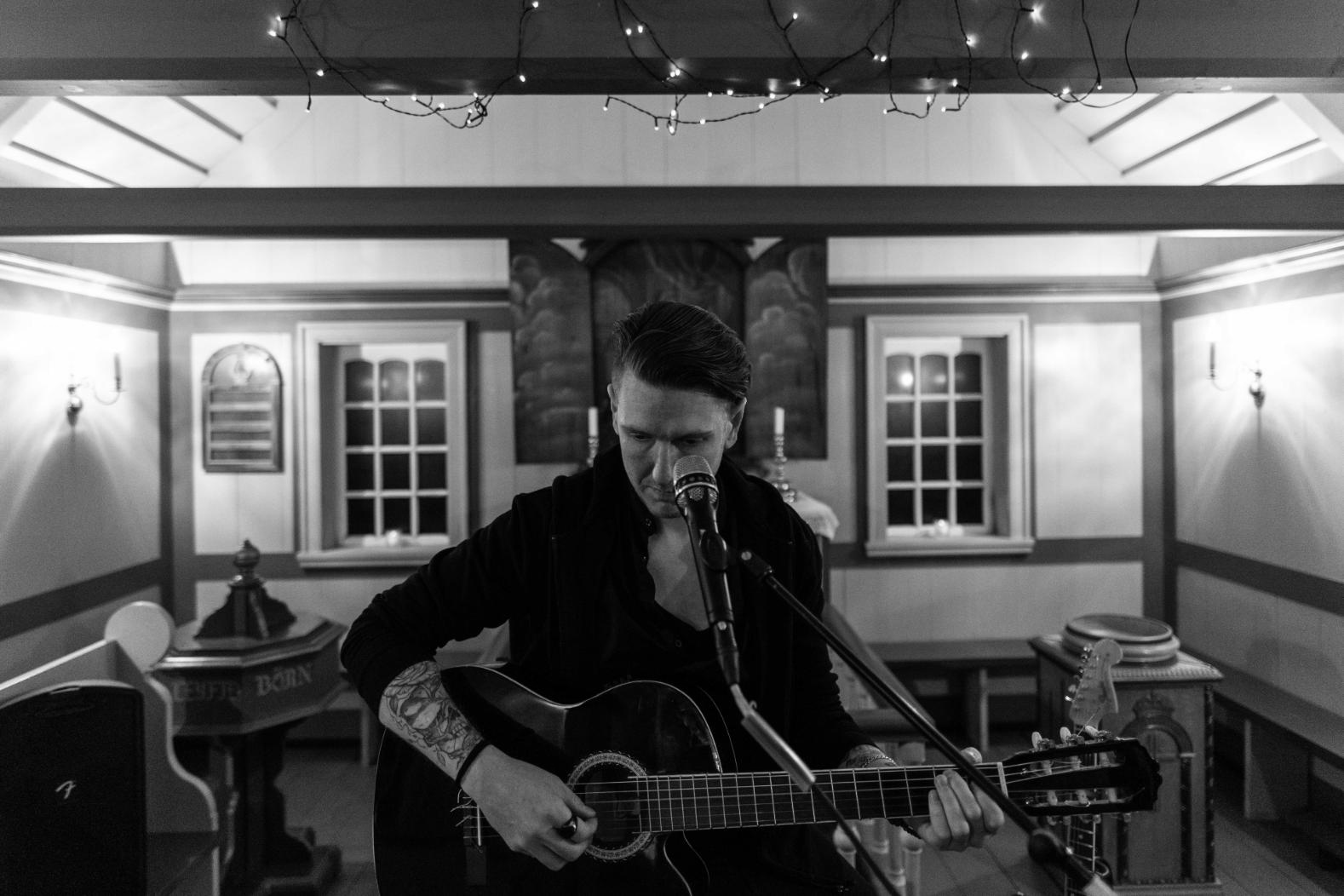 Before the last song Daniel suggested jokingly that after finishing we should applaud frenetically and ask for an encore, which he would graciously grant us. “You had that electric Fender behind you that you didn’t use so far”, I added. The encore was “Hallelujah” with an attempt to get the audience to sing but in spite of the more and more frigid temperature which should’ve made us all stand up, clap and shout like in a Southern Gospel church, what came out of everybody’s mouths was nothing more than a slight whisper. It could have been interpreted as moving, a soft humming of Cohen’s most famous song, a lamentation on lost love through Old Testament references, in a cold and dark church room, but the tiny audience seemed to me unengaged, and not because of the interpreter’s performance.

The concert was over, the lights came out and the promise to get a couple of shots would’ve been forgotten by Daniel if I hadn’t insisted. “30 second of your time, please”, I begged and asked Daniel to play smth in front of the microphone. My request was graciously granted so the evening ended with both music and photos. And a later dive into the Cohen songbook. Not bad for 17.5 EUR.